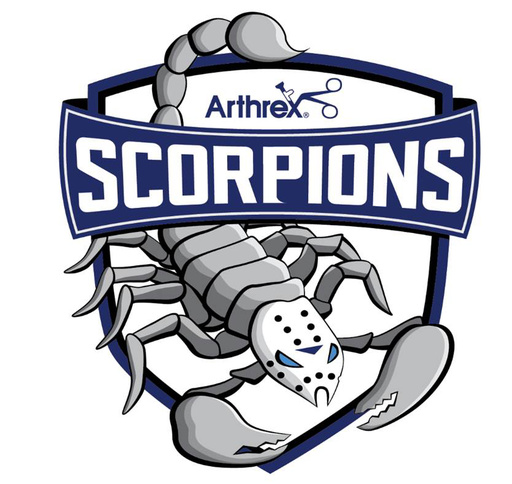 More than 450 employees and their families enjoyed the Arthrex Family Everblades Hockey Game on Friday, April 3, 2015. Although the 'Blades didn't pull off a win that night, they've now gone on to make the Kelly Cup Playoffs with games 3-5 against the Orlando Solar Bears continuing this week. Arthrex proudly sponsors the Everblades and wishes the team the best of luck in the playoffs! 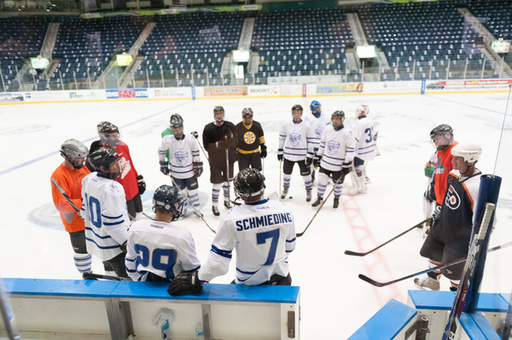 A little known fact is Arthrex has its own hockey team called the Scorpions! If you arrived early to the Everblades game you may have even caught the team's scrimmage with a special guest player, Arthrex Founder and President Reinhold Schmieding! Arthrex Scorpion Team Members include Chris Adams, Zack Day, Patrick Eckhold, Cory Hall, Michael Karnes, Jay Kaszyca, Brandon Kelly, Tim Thompson and David Shepard.

Arthrex Director of Orthobiologics David Shepard shared, "The scrimmage was a fun opportunity to skate, sweat and have some good fellowship on

The Scorpions logo was designed by User Experience/User Interface Designer Ariel Morejon. David's helmet, as featured in the photo to the right, represents Arthrex Orthobiologics. "The helmet design is specifically based on what I do here at Arthrex," said David. "I designed it, along with Medical Animation Supervisor Patrick Eckhold, who drew an early concept. Then we sent it to an artist in Philadelphia to paint the blood cells, platelets, red blood cells and white blood cells 'bursting' out of the helmet. Gross but cool!"

The Scorpions play each Sunday in the adult hockey league at Germain Arena. Check out their last game before playoffs this Sunday, April 26 at 11:15 a.m. The team is currently first place in the league with an impressive record of 7-2-1!