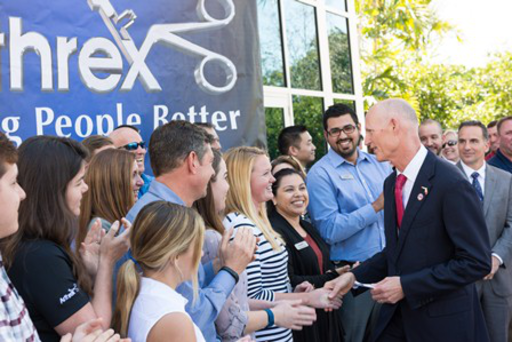 On Thursday, February 18, 2016, Florida Governor Rick Scott and Arthrex President and Founder Reinhold Schmieding announced exciting manufacturing and job expansion plans during a press conference held at Arthrex Inc. The 218,000 square feet of manufacturing facility space expansion in Ave Maria will have a significant economic impact on the local community and create over 350 jobs.

Hundreds of employees, state and local officials and community leaders attended the celebratory event, with employees Juan Valdez, driver, and Janet Chow, Agile Coach/Scrum Master, highlighted by Governor Scott for the opportunities they’ve been fortunate to have while employed at Arthrex. Juan graduated with honors from Hodges University in December 2015 utilizing Arthrex’s tuition reimbursement benefit and Janet came back to work at Arthrex last year from VA thanks to Arthrex’s continued job growth, particularly in the technology industry, over the last seven years since she previously worked for the company.

Reinhold closed the exciting event with, “Please join me in acknowledging and celebrating our dedicated employees and surgeon customers worldwide that have contributed to the continued success of Arthrex!”