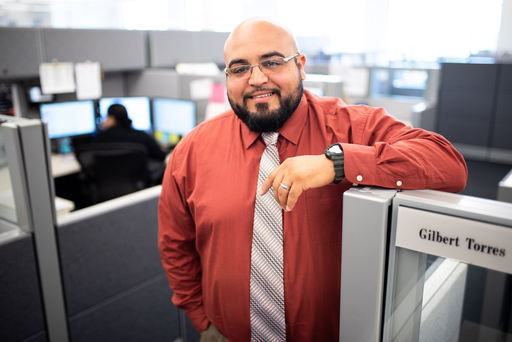 We like to highlight our dedicated employees and their stories, especially the stories that demonstrate our core value of Making People Better. Field Logistics Services (FLS) Support Assistant Gilbert Torres at the Arthrex Logistics Center (ALC) has a story that makes Arthrex employees feel proud to work at a company that cares.

Gilbert shares how he got started at Arthrex and the impact it’s made on his life.

An Opportunity at Arthrex

Gilbert joined the Arthrex team seven years ago as a Clean Room Tech I based in the former Arthrex Manufacturing Inc. South (AMIS) building. He was hired during a time of growth for Arthrex, so Gilbert had the opportunity to learn a lot of different tasks. He became well-versed in packaging, secondary packaging, boxing, molding, production coordinating, CNC operations and more.

After just six months, Gilbert was promoted to a production coordinator position. Whether he’s working with his hands or coordinating projects, Gilbert is driven and energetic about his work. He said, “My favorite part about Arthrex is that the people are phenomenal. It makes it easy to collaborate.”

A big part of Gilbert’s role in field logistics is discussing products with Arthrex representatives so they can replenish inventory for the surgeons they work with. Thanks to his time working in other departments, Gilbert can often answer the representatives’ questions about a kit or a product off the top of his head.

The Importance of Family 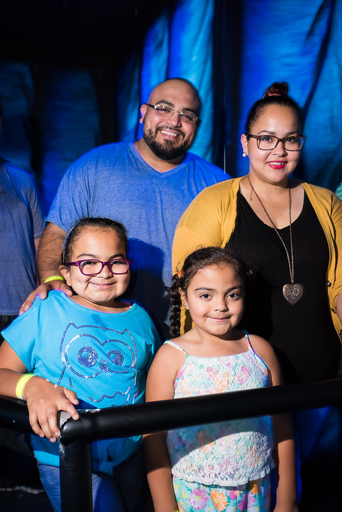 Gilbert has two young daughters who his co-workers love to ask about. He said, “People who have known me for a while always ask about the girls. They don’t say, ‘What’s new with you?’ They ask, ‘What’s new with the girls?’ And that’s the absolute best greeting I could get.”

Gilbert’s daughters, Adriana and Gulianna, were both diagnosed with Hurler syndrome, an enzyme deficiency disorder that can cause joint stiffness, cardiac and respiratory problems and cognitive decline. After their first daughter’s diagnosis, Gilbert’s wife, Debbie, moved to St. Petersburg with their daughter to be closer to treatment. Every day for a year, after Gilbert finished working, he drove to St. Petersburg to be with his wife and daughter until around 11 p.m. and drove the two hours back to AMIS before starting work again. A few years later, when they had their second daughter, Gilbert and Debbie learned that she had the same condition and repeated the year of constant travel and treatment.

“When you become a parent, your whole world changes. You will do absolutely anything for your kids,” said Gilbert. “Companies like Arthrex that are family-oriented definitely understand that. They were with me throughout the whole process.”

When his co-workers heard that his daughters needed multiple surgeries and procedures, they raised money to help with the cost of medical bills and Human Resources matched that amount. Gilbert said, “I remember it was right around Christmas and [my co-workers] surprised me with a check for $1,100. I was moved to tears.”

Gilbert, a self-taught musician, also participated in the 2011 “Arthrex Has Talent” holiday show and won first place. He used the cash prize to help pay for his daughters’ treatments.

Through all of this, Arthrex was becoming more and more personal to Gilbert, especially when he discovered his daughter was a recipient of Arthrex product. He said, “I’ve always loved our mission of Helping Surgeons Treat Their Patients Better™, but when I found out that my daughter was now one of those patients, it became even more important.”

Today, Gilbert is happy to share that Adriana and Gulianna, now 12 and 7, are doing well, enjoying school and excelling in their classes.

Gilbert is grateful for the opportunities he’s had at Arthrex, in particular, the various positions that have helped him learn about the product lifecycle stages and the tuition reimbursement benefit.

Gilbert’s insightful managers and determination to keep learning motivated him to enroll in the business management program at Southern Technical College in 2013. He attended classes and studied at night after working full days at ALC. Gilbert was ecstatic that the tuition reimbursement benefit helped pay for his school. He said, “It feels great to know that the company is supporting you that way. Arthrex made it possible.”

Gilbert graduated in December of 2017 with a bachelor’s degree in business management and was promoted soon after to his current position: FLS Support Assistant.

Tying It All Together

Gilbert’s always happy to share his experiences about Arthrex with his friends, family and even the local newspaper. He was recently quoted in a Naples Daily News story about pay increases for Arthrex employees and the positive effect it had on his family.

He reflected on his experience at Arthrex, saying, “It feels like a family here and after you get that feeling, you never see another company the same way.”

When Gilbert joined the Arthrex team seven years ago, he had no idea how much his work and personal life were going to overlap, but he’s glad they did. He thanks President and Founder Reinhold Schmieding, saying, “The fact that Mr. Schmieding’s entire life’s work is dedicated to helping others is so inspiring. It’s obvious that he wants what’s best for employees and for patients. What else can I say but, ‘thank you’?”