Whether it’s at Arthrex Manufacturing Inc. East (AMIE) or on satellites orbiting Earth, Engineering & Quality Co-op Haley O’Dell is leaving her mark on the engineering industry.

“I always knew I wanted to go into the medical side of engineering because I want to help people. I also knew that Arthrex is a really innovative company and that it had been recognized as a Forbes Best Workplace for Women, which was especially appealing since engineering is a male-dominated field,” said Haley. 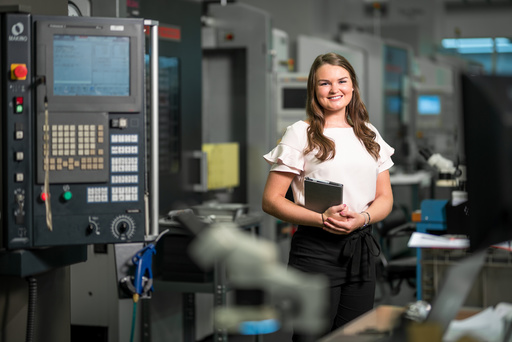 Haley is a junior at Clemson University in South Carolina, but her typical day doesn’t look like that of most of her classmates. After attending a job fair on campus and meeting a few employees, Haley was drawn to Arthrex. She applied for her co-op position and after three full days of interviews with Arthrex staff, she got the job offer and excitedly moved to Naples in May of 2018.

Haley’s co-op experience began with work in the Final Clean department, where she timed processes on the manufacturing floor in order to help look for opportunities to become more efficient. John Skojec, senior manager of operations at AMI – Packaging, oversaw Haley during her first summer here and she said that he was a fantastic influence.

“I was so excited to hear that some of the information I collected was used to plan and make decisions about machine capacity,” she said. “It’s so rewarding to know that, even as a co-op, the work I’m doing makes a difference.” 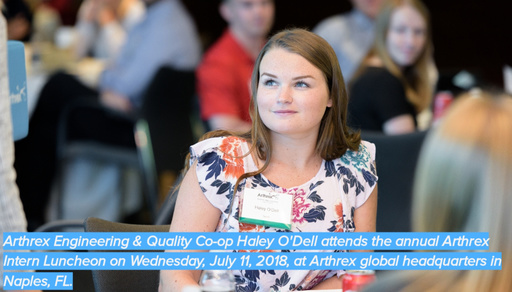 Haley works full time at AMIE during her semesters as a co-op and goes back to being a full-time engineering student on the Clemson campus every other semester. She is currently in her second co-op rotation at Arthrex, this time, with the Total Joint team.

“I’ve only been with the team for about a month, but I really like what I’m doing,” she said. “I’m helping with the baseplate project for the Univers Revers™ total shoulder system by creating routers [plans that determine how the products will go through the plant] and design fixtures for work centers.”

Haley said that includes helping indicate how each implant will be laser marked. She also gets to see the quality and validation process, which is one of the highlights of her role.

“I like being able to see the entire process that an implant goes through, from research and prototyping, to the different stages of manufacturing and so on. The fact that these devices will eventually help a patient, well, that’s why I wanted to go into this. One of my favorite things is watching the Patient Testimonial videos and seeing that what we do is helping people get back to doing what they love,” she said.

Although Haley knows now that biomedical engineering is her dream job, work from her previous internship is still out in space. Before moving to South Carolina for college, Haley lived in Texas, just a few miles from Johnson Space Center in Houston. While she was home for the summer in 2017, Haley interned with an aerospace company and designed Metalphoto® graphics (permanent labels made of anodized aluminum) for the exterior of a NanoLab, which she describes as a tiny green box used to transport items to a satellite that’s now in space. She also helped design a mock-up of the first commercial Airlock Module for the International Space Station that the company now brings to tradeshows as a model. 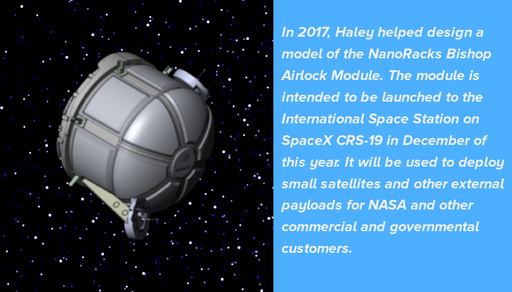 Aerospace and biomedical engineering, though, have more in common than one might guess. Haley said that while aerospace engineering obviously operates on a significantly larger scale, both are incredibly detail-oriented and use many of the same programs.

Haley just began a new project on February 22, thanks to help from Senior Manufacturing Engineer Marcus Rimmer. Similarly to her first summer here, she’ll do more timing on the manufacturing floor, compare actual process times to what’s been recorded in SAP, and help with machine capacity planning.

She said, “I can’t thank Mike Williamson [manufacturing engineering manager] enough for planning this rotation so well. Getting to see both the upstream and downstream parts of the process and going between the two is really beneficial.”

Haley is one of several Clemson students or graduates to work or intern at Arthrex. She and fellow Clemson student Paul Capobianco (engineering co-op) both report to Mike and have been alternating departmental roles each time they rotate.

“I would go back and do this a hundred times over,” said Haley about the experience. “Everyone has been so welcoming and helped me see so many different aspects of industrial engineering. I think it’s going to help me hone in on the part I’m most passionate about, that way I know what to look for in a position after I finish school.”

“Although Haley has only been in our department for a couple months, it has been a real pleasure working with her,” said Kaitlin. “She always strives to learn and is not afraid to ask questions and become involved in our various day-to-day activities.”

Haley goes back to the Clemson campus in August for about a year and a half to finish earning her bachelor’s degree, which was slightly delayed due to her semesters at Arthrex. She says the delayed graduation feels “more than worth it.” Until then, she plans to keep taking every learning opportunity she can and enjoying all the beautiful beaches Naples has to offer. 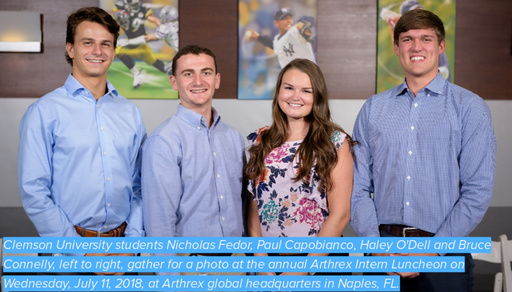