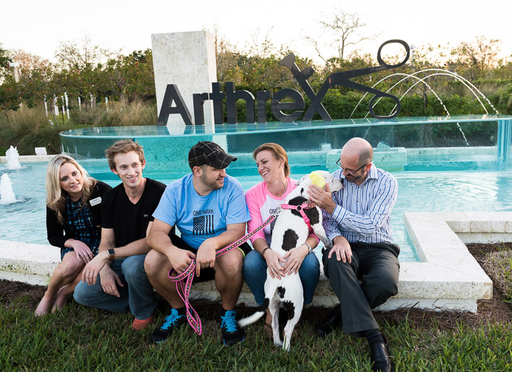 Arthrex is making headlines after Abigail, the pit bull injured in a dogfighting ring, visited its Naples headquarters to meet the Arthrex employees who helped with her recovery. Abigail wagged her tail happily as she jumped up to meet members of the Medical Education, Orthobiologics and Vet Systems teams last month. Her foster family and veterinarian brought her by to say thank you for donating JumpStart™, the antimicrobial bandage that played a crucial role in Abigail’s treatment. Local television, newspaper and radio stations picked up the story and applauded Arthrex and its employees for the thoughtful donation. 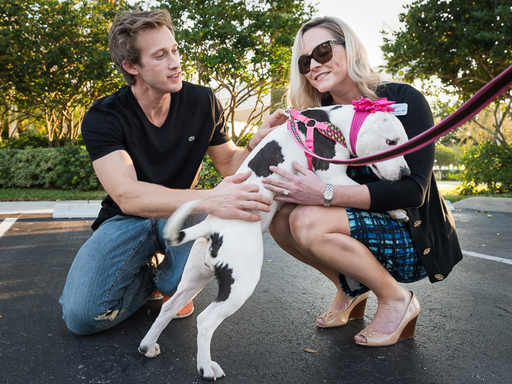 Arthrex Clinical Specialist Michelle Chargot, MD, first saw Abigail’s story on the local news last November and coordinated the JumpStart™ donation. Michelle was heartbroken when she saw the images of Abigail’s injury—her ear and half of her face were torn off after she was likely used as a bait dog in a Miami dogfighting ring. Now, nearly three months later, Michelle was thrilled to meet Abigail for the first time and see how well she’s doing.

Dr. T.J. Jackson of Pets First Wellness Center says Abigail has completely recovered and there is no long-term wound care management. He praised JumpStart™ and said in Abigail’s case he was “blown away” because healthy tissue appeared within just 48 hours and he was able to do a skin graft.

Five days after surgery, Abigail smiled for the first time, a moment captured in this portrait given to Arthrex. 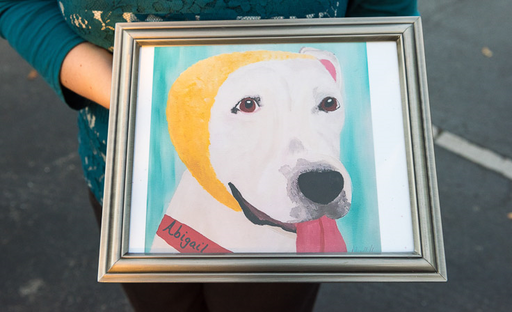 Foster mom, Victoria, says Abigail will soon be “ready for her forever” home. First, she has to be spayed and then can be adopted. Victoria says Abigail will always have a special place in her heart and her story deserves the happiest of endings. 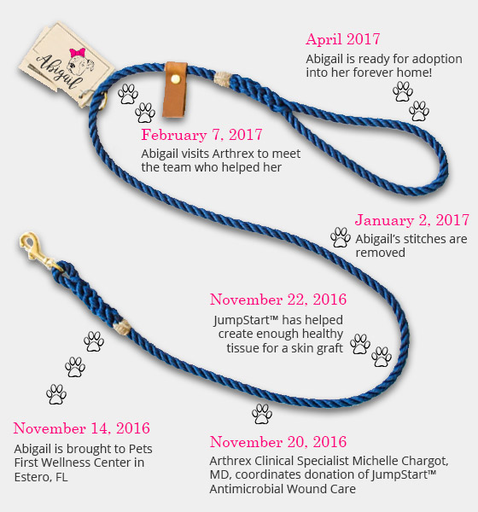