Custodian Crew Coordinator Marco Soto believes in working hard, helping others, that good deeds have a snowball effect and, above all else, that family matters most.

Marco was born and raised in Bolivia. He always had a knack for problem-solving and eventually his talent for fixing things with a hammer and nails developed into a passion for fixing computers and software. He owned and operated a successful security company in Bolivia and taught computer science courses at the nearby university. 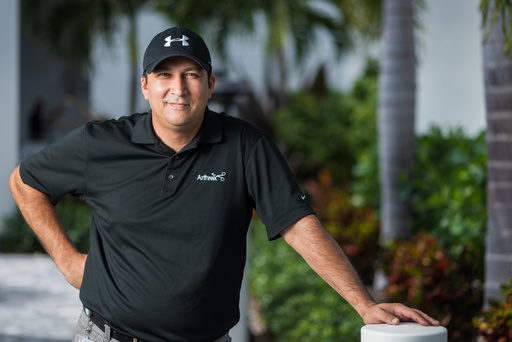 When the Bolivian government’s corruption started to affect Marco and his family on a personal level, Marco moved to Naples, Florida to find steady work until he could afford to bring his wife (Vivienne) and daughter (Danara) with him.

In 2015, Marco was working to fix home computers in Naples when he heard about a contract cleaning position at a local company through Naples Cleaning Services. The contract was for two days and he decided to take the job, which turned out to be here at Arthrex.

“The first two days went well, so I was invited back for a few more days,” said Marco.

Marco soon began working full time as a Facilities contractor. Facilities Manager Mark Callis noticed Marco’s impressive work ethic and friendliness right away, but when he found Marco fixing the handle on a broken door one day, he realized just how willing Marco was to lend a helping hand, before he’s even asked.

“He’s so personable, positive and willing to help with any task that arises,” said Mark.

Marco says that he’s never encountered a problem and thought, That’s not my job. He added, “If something is wrong, I’ll fix it if I can. If I can’t, I’ll find someone who knows how.”

Marco’s family was able to join him in Naples about two months after his contract work began, and in 2016 he became a regular, full-time Arthrex employee when he was hired as a custodian.

Since then, Marco and his wife had a second daughter (Isabella) and Marco has been promoted to Custodian Crew Coordinator, a job he looks forward to doing every day.

“Marco has this obvious desire to succeed and to keep improving the lives of himself and his family,” said Facilities Supervisor Paul Lafata. “Everything he does is with them in mind.”

Marco works on his personal and professional development with the same tenacity as he approaches his daily responsibilities at work. He enrolled in the Rosetta Stone program through Arthrex to practice his English and is working with the HR Benefits team to select college courses to brush up on his computer knowledge using the tuition reimbursement benefit.

Marco and his crew tackle a wide variety of tasks on the Arthrex Global Headquarters campus. In addition to helping keep the buildings sparkling, they check for any broken doors, lights or coffee machines. They wipe down patio tables and open the umbrellas each morning, bring lunch to employees at the J & C building, and, per Marco’s advice to the team, they help fellow employees any way they can. 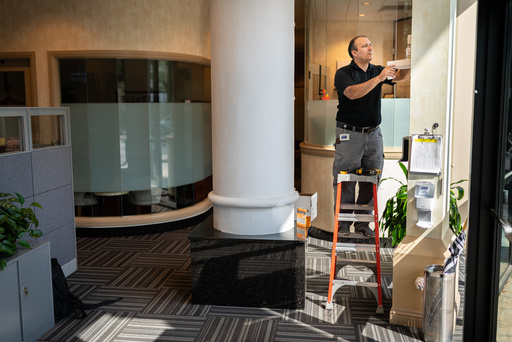 “I love that I have the opportunity to help,” said Marco. “It’s a good feeling when I’m able to do something, even if it’s simple, that makes someone smile or makes their day a bit easier. I think it’s important work and it makes me happier. Arthrex isn’t only a company, it’s a family to me.”

During Marco's first week at Arthrex, he ran into President and Founder Reinhold Schmieding. He introduced himself, thanked Reinhold for the opportunity and congratulated him on the company's scale and success.

Marco felt the overwhelming support of his supervisor, Paul, and co-workers since the beginning, but after a frightening situation in 2017, his team rallied around him more than ever.

Marco’s younger daughter, Isabella, swallowed a small battery from a toy in November 2017, when she was just 21 months old. Marco and Vivienne rushed Isabella to the hospital to find that the battery was lodged in her esophagus.

“I remember we first noticed something was wrong around 5 p.m.,” said Marco.

From the hospital in Naples, he and Vivienne followed an ambulance to Fort Myers, and after more than three hours in the operating room, they were transferred by helicopter to Johns Hopkins All Children's Hospital in St. Petersburg, Florida, where a physician was finally able to remove the battery.

“It was around 5 a.m. by the time they removed it. It was the worst twelve hours of our lives,” he said.

The battery acid caused tissue damage that would result in a hole in Isabella’s esophagus and trachea. She was unable to eat or drink by mouth for about a year.

“We almost lost her,” said Marco. “I had to be strong for my family, but it was so hard.” 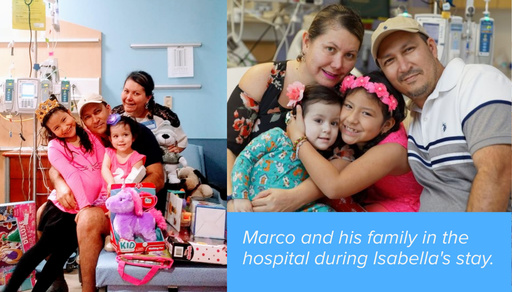 Marco had to take time off of work to be near the hospital in St. Petersburg while Isabella worked toward recovery. He notes that his team was especially willing to help cover his responsibilities during that time and that he couldn’t be more thankful for their support.

Mark noted that the Facilities team and some other Arthrex employees were able to chip in to help with Isabella’s medical bills. He said, “[Marco] is so friendly with so many people, so when they heard the news they wanted to help.”

Even after Marco returned to Arthrex, he would leave at the end of the workday and drive straight to meet his family at the hospital, hours away, and then come right back to work the next morning.

“I remember speaking on the phone with Mark and Paul while I drove to the hospital. They were always checking in to make sure we were okay,” said Marco.

Marco is happy to report that Isabella is making steps in the right direction after 17 surgeries. While he and his family had to spend Christmas of 2017 in the hospital, they were able to be home together this past year.

“When I moved to the U.S. four years ago, I started from zero,” Marco said. “We don’t have any family here and I got that when I started working at Arthrex. I feel very happy and blessed.”

Paul and Mark explained that Marco is vocal about how grateful he is for everything Arthrex has given him every single day, even after being on the team for four years.

“He embodies the core values of Arthrex and his demeanor really has a positive effect on everyone,” said Paul.

Marco said that people ask him all the time what he likes most about his job at Arthrex. His answer is simple: “I work for a company that helps people and I get to walk around while I work and see everyone that my tasks are helping.” 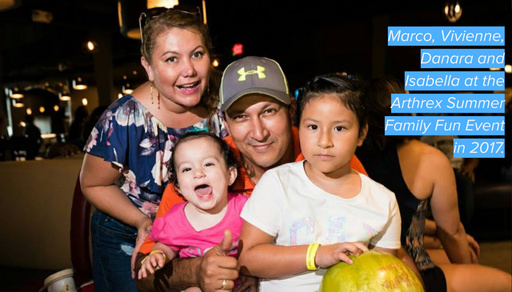