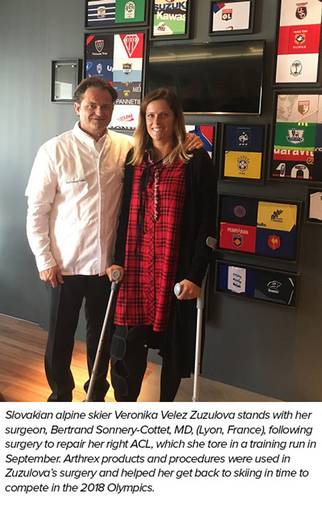 Arthrex is proud to have helped an Olympic skier get back to her sport less than five months after injury, just in time to make a 2018 Olympic comeback.

When Slovakia’s World Cup star and Olympian Veronika Velez Zuzulova tore her right ACL in September during a training run in Argentina, she thought her Olympic dreams were over.

Zuzulova has what many are calling a miracle comeback, as she was back on the slopes three months after surgery and competed in the woman’s slalom competition on Thursday, Feb. 15.

“It was a very emotional night for me,” said Dr. Sonnery-Cottet.

Zuzulova finished 17th out of 78 skiers.

“Medal or no medal, the big picture is that her high-profile story is shedding light on the newly reinvigorated discussion regarding ACL Repair and the significant advantages it offers athletes at all levels,” said Dr. DiFelice.

Congratulations to Veronika Velez Zuzulova! We’re so happy Arthrex products and procedures were able to help her make an Olympic comeback!