In late 2009, the Arthrex Manufacturing Apprentice Program (AMAP) was introduced and the program has now reached a significant milestone: the inaugural apprentices have graduated and are now full-time machinists at Arthrex! Congratulations to Jeff Bentley, Frank Peralta and Enea Ruci on this tremendous accomplishment!

AMAP is a four-year machine skills training program. The program is registered through the State of Florida's Department of Education, and is the only INJ (Individual Non Joint) program in the state, which means that Arthrex is the sole sponsor of the apprenticeship. Arthrex Manufacturing Training Supervisor Mike Koszewnik developed the AMAP curriculum and, along with his team, ensures the necessary components of the program are in place to maintain the accreditation.

Jeff, Frank and Enea invested more than 8,000 hours of daily on-the-job training and cross-training in the various manufacturing departments, as well as six hours per week of classroom instruction. As successful graduates of the program, each will be awarded a certificate from the State of Florida, which is equivalent to a journeyman's card that is recognized throughout the United States. 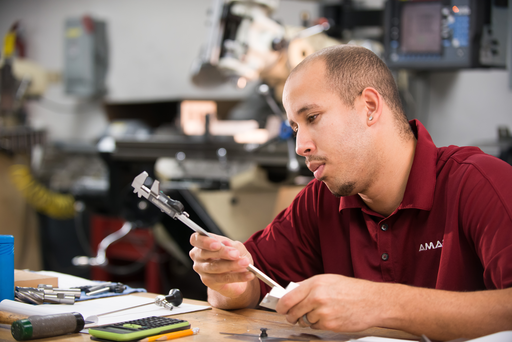 AMAP was launched during a time when other companies were downsizing their workforce and putting internal career advancement programs on hold. Arthrex recognized the rising need for skilled machinists and made the significant investment in a program that would help support our unprecedented growth and expansion into the future.

Arthrex adds four new apprentices to the program each year, and generally looks to accept two Arthrex employees seeking growth and career advancement and two candidates from the community.

Read more about AMAP in a Naples Daily News' article that ran on the front page of the Business section on Thursday, April 3, 2014: Apprentice program wins both ways